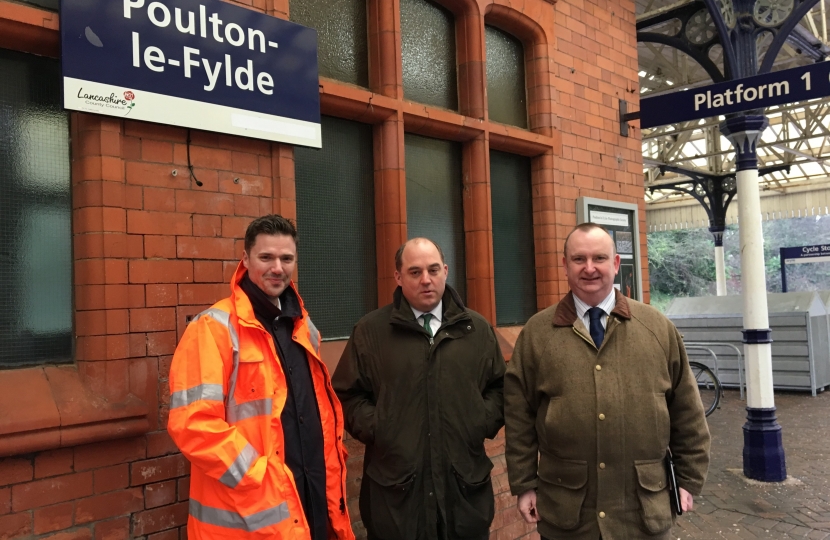 Work started in January to prepare the tracks through and near Poulton-le-Fylde station for more reliable electric train services to run from May 2018.

The major work is being carried out as part of Network Rail’s Railway Upgrade Plan over 10 weekends between Preston and Blackpool and is part of a wider £1bn+ investment in the north of England.

It includes the upgrade and simplification of the track layout in Poulton and Salwick as well improvements to the drainage in the area. Work is also underway to lower the railway beneath two road bridges in Poulton, which will make space for new overhead line equipment that will power electric trains through the area.

Ben Wallace,  MP for Wyre and Preston North, said: “I was delighted to meet Network Rail to talk about how great the progress is to make sure that by 2018 we're going to have electrification all the way from Blackpool into Preston, making more services possible. I think it's a great investment into the area and a great opportunity for my constituents to be able to travel all over the north west and further afield.”

Michael Butler, commercial scheme sponsor at Network Rail said: “We are halfway through the first phase of work in Poulton, which is on target to finish in April. The track and drainage work forms an important part of our Railway Upgrade Plan and will help to pave the way for new electric trains between Preston and Blackpool North from May 2018.  Ultimately, it will benefit the local economy by helping more passengers get to work and school, see their friends and family, as well as travel to major tourist attractions in the area.”

For more information and advice on how to plan your journey, go to www.nationalrail.co.uk