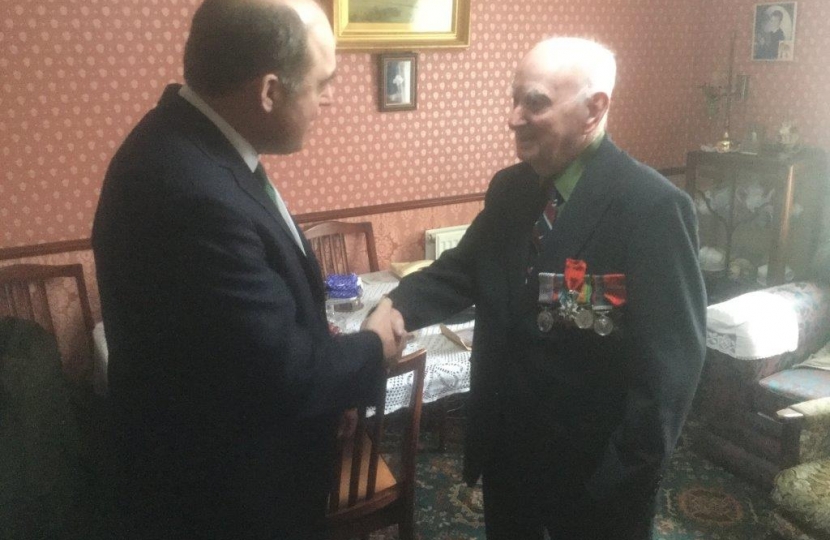 Mr Henry Townsley who took part in the D-Day landings as a Flight Engineer on a Lancaster Bomber was presented with the Legion d’honneur recently by Wyre MP Ben Wallace.  The presentation took place at the veteran’s home in Poulton-le-Fylde in the presence of Mr Townsley’s close family.
Mr Townsley who served on Lancaster and Halifax bombers during WW2 took part in operations connected with the D-Day landings as well as serving two tours as a Flight Engineer which consisted of over 50 bombing missions.
During the visit Mr Townsley who was a Warrant Officer in the RAF showed Mr Wallace his flight book which gave details of his distinguished service noting each mission and its outcome.It was a neighbour of Mr Townsley, Mr Peter Riddle, who alerted local MP Ben Wallace after learning that the Legion d’honneur was being presented by the French Government to D-Day Veterans and knowing that Mr Townsley had served and not yet received the medal.  Mr Wallace then worked with the MOD and French Government to ensure Mr Townsley received it.

After the presentation Mr Wallace said, "I am honoured to present Mr Townsley with the Legion d’honneur.  The courage of Mr Townsley and his fellow crew members must never be forgotten, their actions were vital to the liberation of France and the defeat of the Nazis”.