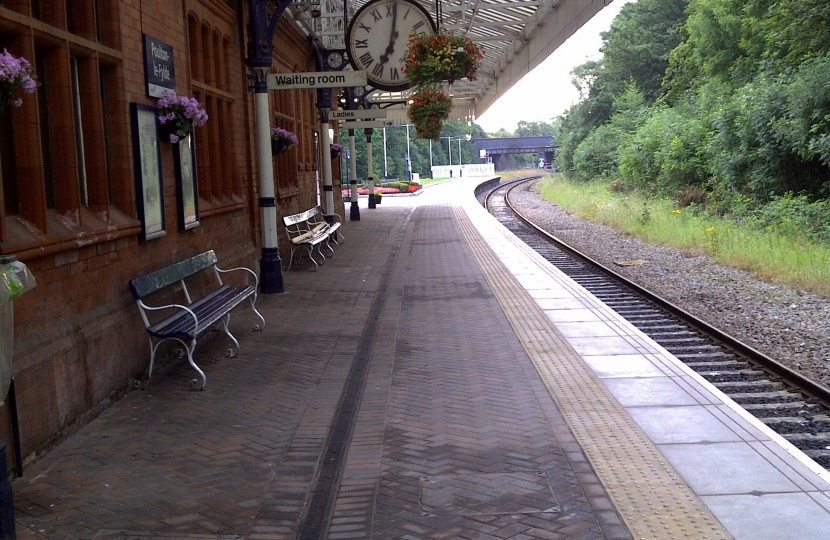 Ben has campaigned for several years to have the Blackpool to London service re-instated and for the service to stop at Poulton-le-Fylde as detailed in the press releases below.  Ben says, "while I am delighted that the service stops at Poulton, it is only a limited service at this time however, I am pleased that permission has been granted recently (07/08/15) to extend this service to run Six return trains a day between London and Blackpool - starting in 2018."

Local MP Ben Wallace today confirmed that after a recent meeting with Chiefs at Virgin rail, the London to Blackpool link will include a stop at Poulton-le-Fylde.

After the news Mr Wallace said, “I am delighted that Virgin have listened and barring any technical difficulties will be including Poulton on the Blackpool to London line.  I would like to thank all concerned residents who contacted me to highlight their concerns and also pass on their local knowledge to me.  From the outset I was determined to fight the decision not to stop at Poulton and now due to Virgins rethink, residents will be able to go to London direct.”

In a letter to Mr Wallace Virgin have confirmed that they have developed the proposal and a more detailed analysis has shown that the platform lengthening designed to accommodate six-car formations of TPE’s Desiro trains does in fact allow our Voyagers to call at Poulton.  They are still carrying out checks using actual trains for such things as disabled access, but in parallel to that have incorporated calls at Poulton into the Blackpool services proposal for which they are seeking approval.

Local MP Ben Wallace today called for an urgent meeting with officials from Virgin Rail in order to get more detail about the London to Blackpool North Service which was reported yesterday.

Mr Wallace said, “I need to know if Virgin intends to make Poulton-Le-Fylde a regular stop on the new service, and if not why not?  I believe it is vital for the town that this service stops in Poulton-Le-Fylde.  I have always supported getting this service re-instated however if it does not stop in Poulton-Le-Fylde I will withdraw my support from this bid and support any rival bid which will stop in the town.  The people and businesses of the town are having to deal with bridgeworks on Tithebarn Street in order to upgrade the line.  It is right that they should benefit from the upgraded line when finished.”

The Wyre MP went on to say, this service would boost the local economy and would enable local people to travel to London without changing.  I will do all in my power to make sure this service stops in Poulton-Le-Fylde.”

After hearing speculation that the new London to Blackpool train service to be run by Grand Central would not stop at Poulton-le-Fylde as previously announced, I contacted Grand Central yesterday to seek clarification. I am delighted to advise that the company has reaffirmed it’s commitment to stop at Poulton. This is great news. Further details, including the proposed timetable can be found here: https://www.grandcentralrail.com/popular-…/london-blackpool/